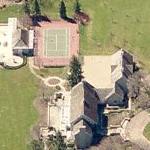 At the age of 16, Michael J. Falcone became the youngest licensed real estate salesman in the State of New York in 1952. He and an old high school friend in the contracting business formed the Pyramid Companies and built shopping centers, warehouses, office buildings and student apartments throughout the northeast. In 1975, Mr. Falcone left Pyramid and formed The Pioneer Group, which quickly became one of the largest downtown office building developers in Central New York, with major projects in Buffalo, Rochester and Syracuse. Currently Mr. Falcone serves on the Board of Trustees of Syracuse University. He is a member of the New York State Business Council and the Corporate Advisory Council for the Syracuse University School of Management. He previously served as Chairman of the Board of Directors of First National Bank of Rochester and of LeMoyne College, among others.

This 6 bedroom, 5 bathroom mansion has 9,856 square feet and was built in 1980. It overlooks Skaneateles Lake in the Finger Lakes region of New York. Its value is currently assessed at$4,286,600. Michael J. Falcone transferred this property to his son for $10 in 2003. The 23.9 acre property includes everything within the white fence, from the road to the water.
Links: www.bloomberg.com, www.bloomberg.com, www.campaignmoney.com
3,529 views