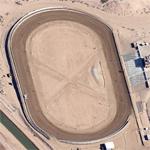 In 1968, a 1/4 mile dirt track known as Yuma Speedway was built here. Frank Golden, the original track owner, sold the property in 1978 as he was in poor health. He passed away three years later. The track laid dormant until Jerry Thomas purchased the land in 1988 and began a $1 million renovation project that enlarged the track to its current 3/8 mile size. For 11 years, the track was operated by several groups and eventually closed in 1999.

The Cocopah Indian tribe purchased the track in 2005, but it needed much work to reopen as it was heavily weathered and vandalized. After much work, it reopened in 2010. Since then, the tribe has continued to improve the facility.

Due to its warm climate, it operates year-round, save for a few months off during the excessive heat of the summer. It currently hosts special sprint car events in the winter. Stock cars and modifieds race here on a regular basis.
Links: www.cocopahspeedway.com, www.youtube.com
949 views