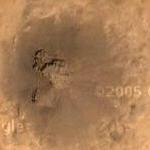 The core of the pyramid was built of dark, almost black mud brick, which still stands as an odd-shaped sentinel. The stone casing has completely collapsed around it.
Links: www.phouka.com
1,119 views