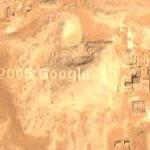 By kjfitz @ 2005-09-28 11:54:52
@ 29.840402, 31.21336
Saqqara, Egypt (EG)
Pepi II's pyramid in South Saqqara was the last to be built in the best traditions of the Old Kingdom. It was named "Pepi's life is enduring", which indeed it was. He reign we believe lasted 94 years, longer then any other Ancient Egyptian pharaoh. The pyramid is located on the the southern edge of the necropolis, about three miles south Djoser's Step Pyramid, which probably made it a source of inspiration for Middle Kingdom pyramid builders.
Links: www.touregypt.net
889 views