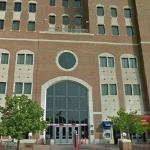 By Matheus_ @ 2011-12-31 12:05:28
@ 30.437023, -84.303154
Tallahassee, Florida (FL), US
Bobby Bowden Field at Doak Campbell Stadium is the football stadium on the campus of the Florida State University in Tallahassee, Florida. It is the home venue for the university's football team, nicknamed the Seminoles. The stadium was named for Doak S. Campbell, the president of the university at the time of its construction, and the field was named for legendary head football coach Bobby Bowden. The stadium is part of the University Center complex, a mixed-use facility encompassing university office space, university classrooms, the university's Visitor's Center, souvenir store, The University Center Club, as well as skyboxes and press boxes for use during football games. Following the latest expansion in 2003, the stadium has a seating capacity of 82,300, making it the fourteenth largest stadium in the NCAA, the largest football stadium in the ACC and the largest continuous brick structure in the United States. On November 20, 2004 in accordance with an act of state legislation, the stadium and field were renamed Bobby Bowden Field at Doak Campbell Stadium. Prior to the start of the 2007 Season a new state-of-the-art sound and public address system was installed. Before the 2008 Seminole Football Home Season two new HD Scoreboards were installed. The main one in the north endzone measures over 100 ft (30 m), the south endzone has a 45-foot (14 m) scoreboard. Six new LED ribbon boards were installed in each of the four corners of the stadium as well as underneath the north scoreboard, over the player entrance and above the entrance used by the Marching Chiefs. The new boards allow for more game stats and more information on other games in addition to improved replay viewing.
Links: en.wikipedia.org
1,005 views