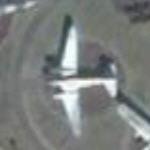 The Wright Cyclone engines allowed the B-23 to fly 67 mph faster than the B-18, but it was considered obsolete by the beginning of World War II. It was used during the War as an anti-submarine patrol aircraft and also as a transport, designated as UC-67, capable of carrying 12 passengers. A total of 38 B-23's were built. After the War, some were used as executive transport aircraft.

The aircraft on display at Castle Air Museum was delivered to the U.S. Army Air Corps in July 1940. It served less than two years before being made a ground instructional airframe at McChord Army Air Force Base in Washington state. It was later dropped from the Army Air Forces inventory in August 1942.
Links: www.elite.net
867 views