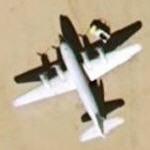 To meet the military’s more stringent needs, the DC-4 was given a cargo door, stronger floor, cargo boom hoist and larger wing tanks. First flight of the military C-54 occurred on 26 March 1942. During the war years, 1242 C-54s were delivered with a wide variety of modifications. A few of the major ones were the C-54A, the original, fully militarized model capable of lifting 50 soldiers or 32,500 pounds of cargo; the JC-54D, which was modified for missile nose cone recovery; the C-54E, with larger Pratt & Whitney engines, bigger fuel tanks for longer range and a specially designed cabin for quick conversion between passenger and cargo roles; the C-54M, which was a C-54E stripped out to serve as a coal-carrier during the Berlin Airlift; the EC-54U, a post-war modification as an electronic counter-measures platform; and at least 14 sub-variants built for the US Navy originally called the R5D (the museum’s airplane is one of these R5D’s). There were numerous other variants which performed countless other roles, from VIP transport to multi-engine training.

The C-54 offered sterling service for both the USAF and the US Navy after the war, and was not fully retired until the late 1960’s. Ex-military Skymasters became popular as cargo transports and fire bombers, and many are still in active use around the world in these roles.

In the photo at the top of this page, taken on January 19th, 2002, the museum’s latest acquisition is shown after landing and taxi-ing over to the museum. Not having flown in nearly seven years, it made the flight from Tucson, AZ, with no problem. Before it was retired, its last duty service was as a fire bomber. More details of the aircraft history are given below.

May 31st, 1945 - delivered to the USAAF (serial number 42-72636), transferred to the US Navy that same date, and redesignated from C-54D to R5D-3 with registration (Bureau Number) 56514. Note that another serial number, 10741, is assigned to this aircraft; this is probably the manufacturers’ serial number. In its fire bomber period, it was designated civilian N67062.

January 19th, 2002 - Flown by Bill Dempsay and a crew of two assistants to March Field Air Museum after purchase by the museum for $50,000 from Maricopa Air Services, Tucson, AZ.
Links: marchairmuseum.com
1,584 views