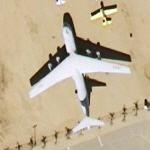 It retired from service and was towed across the runway to the museum in November, 1999 after its 44,130 flight hours had exceeded designed safety limit specifications.

This aircraft could transport paratroopers, 13 cargo pallets, hospital patients, vehicles, combat troops or any combination, and, could also be employed for air drops.

It could carry 166 passengers in airline style seats; 205 passengers or 168 fully equipped paratroopers in the side-facing seats. 103 litter patients could be carried.

This aircraft was also modified to carry the Minuteman Missile.

The Starlifter was the primary aircraft used to transport the American POW’s home after the Viet Nam war.

This aircraft was the first plane to arrive in Oklahoma City with the Red Cross and search dogs, after the tragic bombing.

Those of us at the March Field Air Museum extend our deepest gratitude to the men and women of the 452nd AMW, March ARB, for helping to make 65-0257 part of our proud collection.

According to the AF Historical Research Agency, Maxwell AFB, AL, this aircraft had the following history:

- Manufactured by Lockheed Aircraft, Marietta GA and gained by the USAF on 27 May 1966.