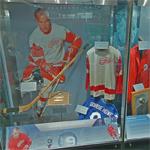 Howe played the majority of his career with the Detroit Red Wings from 1945-71. He came out of retirement to join the new World Hockey Association in 1973. By doing so, he had the opportunity to play with his sons Mark and Marty in Houston. After the WHA folded six years later, Howe played one final NHL season with the Hartford Whalers in 1979-80.
Links: en.wikipedia.org
335 views