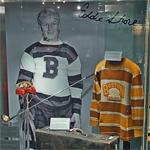 Shore began his pro career by playing two seasons in the Western Canada Hockey League in Regina and Edmonton. When that league folded, he was dealt to Boston, where he played with the Bruins for over 13 seasons. He won the Hart Trophy (NHL's MVP honours) four times, the most ever by a defenceman. Shore's legacy is also defined by his sheer toughness. In his second season, he broke the record for the most penalty minutes in a season.

Near the end of his playing career, he purchased the Springfield (MA) Indians minor league team. He owned the team from 1939-76.
Links: en.wikipedia.org
417 views