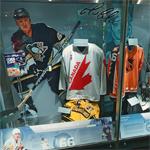 He played his entire career with the Pittsburgh Penguins from 1984-2006. Although he ranks among the all-time leaders in several offensive categories, his numbers suffered due to a bout with Hodgkin's lymphoma and chronic back and hip pain. He has been the principal owner of the Penguins since 1999.
Links: en.wikipedia.org
337 views