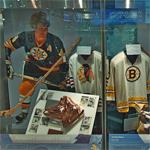 Orr is widely considered to be the best defenceman to ever play the sport. In a career shortened by knee injuries, he played just over nine seasons with the Boston Bruins (1966-1976) and 26 games over three seasons with the Chicago Black Hawks (1976-78). He is the only defenceman to lead the league in scoring, which he did twice. He won the NHL's Norris Trophy (best defenceman award) eight straight seasons from 1968-1975.
Links: en.wikipedia.org
357 views