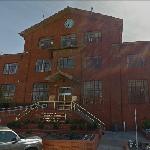 By Mike1989 @ 2013-11-17 09:24:38
@ 30.72296, -95.546641
Huntsville, Texas (TX), US
Texas State Penitentiary at Huntsville or Huntsville Unit (HV), nicknamed "Walls Unit," is a Texas state prison located in Huntsville, Texas, United States. The approximately 54.36-acre (22.00 ha) facility, near Downtown Huntsville, is operated by the Correctional Institutions Division of the Texas Department of Criminal Justice, administered as within Region I. The facility, the oldest Texas state prison, opened in 1849.

The unit houses the State of Texas execution chamber. It is the most active execution chamber in the United States, with 500 executions after 1982 when the death penalty was reinstated in Texas.
Links: en.wikipedia.org, www.txprisonmuseum.org
1,258 views