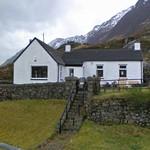 
After his death, hundreds of allegations of child sex abuse and rape became public, leading the police to believe that Savile may have been one of Britain's most prolific sex offenders.
Links: en.wikipedia.org
2,956 views