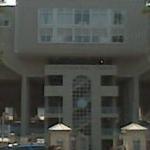 By Matheus_ @ 2011-12-31 06:56:29
@ 35.908287, -79.047028
Chapel Hill, North Carolina (NC), US
Kenan Memorial Stadium is located in Chapel Hill, North Carolina and is the home field of the North Carolina Tar Heels. It is primarily used for football. Kenan Memorial Stadium opened in 1927 and holds 62,980 people. It is located in a cluster of pine trees near the center of campus at the University of North Carolina, next door to the Bell Tower. Since the stadium was opened, it has been an unwritten rule that the stadium can never be taller than the surrounding pine trees. Mel Kiper, Jr. ranks Kenan Stadium as the third most scenic venue in the country for college football.
Links: en.wikipedia.org
528 views