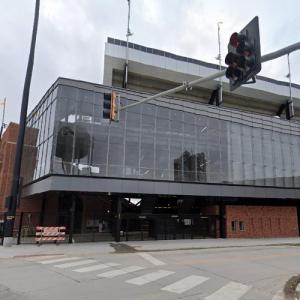 By Matheus_ @ 2011-12-31 06:46:12
@ 41.658685, -91.549902
Iowa City, Iowa (IA), US
Kinnick Stadium, formerly known as Iowa Stadium, and known in the area simply as Kinnick, is a stadium located in Iowa City, Iowa, United States. It is the home stadium of the University of Iowa Hawkeyes, in the sport of college football. First opened in 1929, it currently holds up to 70,585 people, making it the 7th largest stadium in the Big Ten, and one of the 20 largest university owned stadiums in the nation and is consistently ranked one of the top 25 loudest stadiums in the country. It is named for Nile Kinnick, the 1939 Heisman Trophy winner and the only Heisman winner in university history, who died in service during World War II. It was named Iowa Stadium until 1972, when longtime lobbying by Cedar Rapids Gazette sportswriter Gus Schrader successfully convinced the UI athletic board to change the name.
Links: en.wikipedia.org
1,068 views