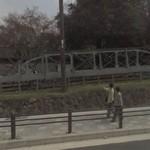 By Dania @ 2009-07-26 16:03:17
@ 35.00991, 135.789099
Kyoto, Japan (JP)
Lake Biwa Canal is a waterway in Japan built during the Meiji Period to transport water, freight, and passengers from Lake Biwa to the nearby City of Kyoto. This waterway was also used as Japan's first hydroelectric power generator, which served to provide electricity for Kyoto's trams.

As of 2008, the waterway is not used so much to generate electricity, but rather for water supply, fire-fighting and irrigation purposes.
Links: en.wikipedia.org
613 views