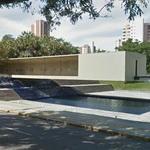 This building was built in Fortaleza shortly after the death of Castelo Branco, the first President of the Republic during the military dictatorship of 1964. Inauguration took place in 1972, the 150th anniversary of independence. This is an interesting piece of modern architecture, with a large cantilevered structure that stands on water surface.
Links: portalarquitetonico.com.br, en.wikipedia.org
716 views