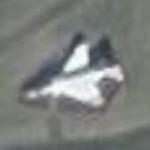 The U.S. Navy F-4s were called into military action in August of 1965, when F-4Bs were used to escort a Navy strike in Vietnam. By 1973, Navy F-4s were credited with 32 victories over North Vietnamese Migs. Navy and Marine F-4s were usually confined to ground support roles.

The U.S. Air Force F-4s arrived in Southeast Asia in early 1965. Of the 179 aircraft imported from China by North Vietnam during the conflict, 137 were downed by the USAF. Of these 137, 107.5 were downed by F-4s, with the last Mig destroyed by an F-4D on January 8, 1973. Although highly effective in close in ground support, reconnaissance, and electronic warfare (ECM) roles the loss of Phantoms were high. By January 1, 1972, 362 Phantoms were lost, mostly to ground fire.

The F-4 was an instant success with domestic as well as foreign air forces. With their completion in 1979, 5,057 Phantoms had been built at the St. Louis, Missouri McDonnell assembly plant. Also by 1979, the F-4 and its versions had been delivered to or produced in Great Britain, Iran, Israel, The Republic of Korea, West Germany, Spain, Japan, Greece, Turkey, and Egypt. By 1977, the U.S. Navy had accepted 1,264 F-4s. By 1975, 1,631 F-4 versions remained in the U.S. Air Force active inventory and 117 in Air National Guard and Reserve units.

The aircraft on display at Castle Air Museum is an F-4E built in 1966. It started its career in the 33rd Tactical Fighter Wing at Eglin AFB, Florida in 1967. In March of 1969 it began its transformation into an Air Force Thunderbird to be assigned to the Air Demonstration Squadron at Nellis AFB, Nevada.

It served as an Air Force Thunderbird for five outstanding years where it earned the nick name "Super-fine 289", finally moving back into Tactical Fighter Wing duty in 1974. After several stateside duty assignments, this aircraft was eventually processed into storage in March of 1991 at Davis-Monthan AFB, Arizona.

In January of 1995, the Castle Air Museum received permission from the Air Force to bring this F-4 to our museum for restoration. After hundreds of volunteer man-hours of re-assembly, and a whole new coat of paint, our newest addition to the museum was ready for a formal dedication on February 10, 1996.

We are very proud of this aircraft. Restored to its former glory representing U.S. Air Force Thunderbird number 6, 66-0289 joins only four other F-4 Thunderbirds that have been restored.
Links: www.elite.net
691 views