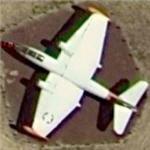 The Canberra saw action early during the Vietnam Conflict, arriving in 1964. During that time, 24 B-57s participated in the Rolling Thunder bombing campaign along with other types of U.S. Air Force aircraft.

The most interesting version of the B-57 is the RB-57F reconnaissance aircraft. Its role was similar to that of the U-2, a high flying, long endurance spyplane. To this end, the RB-57 wingspan was lengthened to 122 feet, in order to lift the aircraft to extreme altitudes.

The aircraft on display at Castle Air Museum is an electronic warfare version. Its mission was to simulate enemy attacks against American airspace, in order to test our defenses. It began life as a B-57E and was delivered to the Air Force in 1956 and served with the Air Defense Command.

It was modified to its EB-57E configuration in 1964 and served last with the 17th Defense Systems Evaluation Squadron at Malstrom Air Force Base in Montana. It was acquired by the Museum from the Military Aircraft Storage Facility in Arizona and was restored in 1992 by Castle Museum volunteers.
Links: www.elite.net
757 views