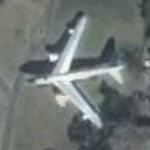 The Aircraft on display at Castle Air Museum is one of 264 B-47E-DTs built by Douglas Aircraft Company in Tulsa, Oklahoma for Boeing. It served with SAC's 9th, 509th, and 40th Bomb Wings in Idaho, New Mexico, New Hampshire, and Kansas. In 1964, it was transferred to the Navy and used as a photographic training target at the China Lake Weapons Center in California.

Museum volunteers, headed by Mel Hedgepeth, towed the aircraft 23 miles through the desert and spent over 36,000 man-hours restoring the aircraft to flying condition. In 1986, it made the last flight ever of a B-47, flying from the China Lake facility to Castle Air Force Base in Atwater, California, to join the Museum Collection.
Links: www.elite.net
1,285 views