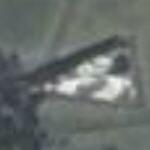 A total of 76 FB-111s were built and their role was that of a high speed. low level bomber capable of delivering a nuclear payload. It was capable of speeds over Mach 2.5, two and a half times the speed of sound, at altitude. It could attack at altitudes of less than 200 feet at near supersonic speeds. It was able to do this because of a sophisticated Terrain Following Radar system which actually flew the aircraft during these approaches.

The aircraft could carry two nuclear weapons or two Short Range Attack Missiles called SRAMS, in its weapons bay and up to four more SRAMs on it wing hardpoints. This powerful armament, coupled with its exceptional performance, made even a single FB-111 a force to be reckoned with.

The F-111 was the first swing wing aircraft to be put into production. The wings are set forward when more lift is needed, for takeoffs and landings or low speed flight. They are retracted for high speeds to reduce aerodynamic drag on the aircraft.

FB-111s were operational with the Strategic Air Command from 1970 until 1991, when they reverted to a conventional role and were converted to F-111Gs, serving with the new Air Combat Command. Those not redesignated were retired and sent to museums or to the Air Force Storage Facility in Arizona. The Royal Australian Air Force still operates two squadrons of updated F-111C and F-111G tactical bombers and RF-111 reconnaissance versions in the Strike Reconnaissance Group based in Queensland. The RAAF plan to operate them for several more years as there is no replacement aircraft with the combination of range and load-carrying ability that the F-111 has.

The aircraft on display at Castle Air Museum entered service in 1971 and last served with the 509th Bomb Wing at Pease Air Force Base. The aircraft was delivered to Castle in late 1991 and was put on display in July 1992.

We have received reliable information about the correct paint scheme and color specifications for this aircraft. As soon as we are able, it will be repainted.
Links: www.elite.net
694 views