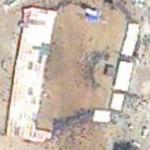 By kkeps @ 2011-07-19 06:20:03
@ 4.849761, 31.582088
Juba, South Sudan (SS)
The independence celebrations took place at the memorial for John Garang, a rebel leader with the Sudan People’s Liberation Army. He played a significant role in the peace declaration of January 2005, following which he became a Vice President of Sudan, and President of the Autonomous Government of South Sudan. However, he died in a helicopter crash only seven months later. Garang remains a popular figure in South Sudan.
Links: www.googlesightseeing.com
565 views