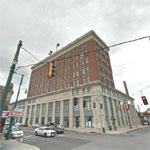 By jbottero @ 2013-07-13 21:01:09
@ 35.132804, -90.058829
Memphis, Tennessee (TN), US
Memphis Central Station, referred to as Grand Central Station prior to 1944, is located at 545 South Main Street in Memphis, Tennessee, on the corner of Main Street and G.E. Patterson Boulevard, just south of the downtown business district. The station is currently served by Amtrak's City of New Orleans route as well as Memphis Riverfront and Main Street trolley cars.

Central Station was built on the site of a former station known as Calhoun Street Station. Both stations were owned by the Illinois Central Railroad or its predecessors. Construction of Memphis Central Station began in September 1912, and the station was opened for service on October 4, 1914.
Links: en.wikipedia.org
815 views