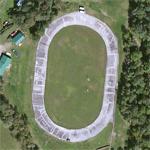 The races were announced by Ken Squier, who would go on to be a national television motorsports commentator. The track's original flagman, Archie Blackadar, would eventually work for 30 years with NASCAR as a steward.

The speedway was tremendously successful in the first 3-4 years, but with the introduction of other race tracks in the area, fewer race cars participated, and attendance declined.

Over time, the property was grown over with trees and brush, but the track surface and front stretch wall remained hidden within the woods. This is visible in historical satellite views in Google Earth.

A restoration project began in 2008. Since then, a reunion was held here with many of the old cars and drivers from that era. The speedway was added to the state's historical registry in 2012.
Links: www.northeasternspeedway.com
796 views