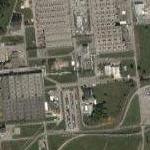 the world's first gaseous diffusion plant, the method of uranium enrichment with the best theoretical basis, championed by the British, but which had never been tried in practice.

K-25 was huge, even by Oak Ridge standards, with fifty four-story buildings totaling 2,000,000 square feet, in a U-shape measuring a 2,600 feet long by 1,000 feet wide. Covering some 44 acres, the K-25 building was the world's largest roofed structure when it was completed in March 1945. Housing and service facilities were built for the population that eventually reached 15,000.

Y-12Inside K-25, a series of over 1,000 huge cells were linked in a cascade through which uranium hexafluoride gas traveled, with small fractions of the U-235 isotope separated by a barrier material with microscopic pores. Production problems at K-25 led to an August 1943 decision that K-25 would not fully enrich uranium but would produce partially enriched feeder material for Y-12. A key production problem was developing a suitable diffusion barrier, material with millions of tiny holes that would also withstand the extremely corrosive gas involved. That problem was not solved until 1944 enabling production in 1945.
Links: www.google.com
1,949 views