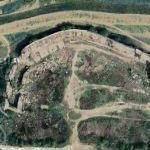 Shornemead Fort was designed to be able to house 13 cannon, and work began in 1847, finishing six years later. However, the ground upon which the fort stands is marshy and proved incapable of supporting such a structure and the fort was completely rebuilt.

The new fort was in the shape of a D, with the curved area for gun placements and casemates, and behind that were barracks and admin buildings. The same problems with the marshy ground caused further problems and in spite of superficial strengthening work on the magazines, it was decided by 1904 that Shornemead Fort could not withstand an attack. It was disarmed and no further work took place around the fort until two 5.5in guns were fitted during the Second World War; these were decommissioned at the end of hostilities.

Post-war, Shornemead Fort’s only use came as target practice for the Royal Engineers' demolition squad, and their effectiveness is evident from the concrete, bricks and rubble at the site; they are all that remain of the barracks and administrative buildings
Links: en.wikipedia.org
655 views