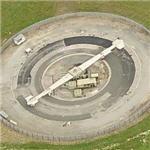 By kjfitz @ 2009-02-04 09:38:08
@ 47.153679, -1.641336
Nantes, France (FR)
Accelerated Pavement Test facility for the sudy of full scale experimental pavements submitted to heavy traffic levels. This major facility became operational in 1984 at the LCPC Nantes Test Center. It makes it possible to reproduce in less than a week up to a full year's truck traffic load supported by a heavily- trafficked pavement, with load speeds capable of reaching 100 km/hr.

Tests may focus not only on new pavement structures, but on their maintenance and reinforcement techniques as well. The observations and measurements enable the monitoring under traffic of the fatigue and rutting behavior of materials, the evolution of pavement surface characteristics, the tire wear, etc.

The facility experimental site consists in three test rings, with its central motorization and four arms being movable from one ring to another within a week's time. One of the rings has been fitted with a waterproof concrete pit to ensure hydraulic insulation of the pavement subgrade with the external water table.
Links: www.lcpc.fr
491 views