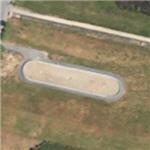 By kjfitz @ 2009-02-04 09:57:20
@ 47.153746, -1.646833
Nantes, France (FR)
A mobile rail-mounted carriage fitted with a three-axis platform follows a reference path that serves as the basis for comparing the path provided by the tested positioning system. This carriage and the test track together constitute "Sessyl", the positioning system evaluation facility set up at the LCPC Nantes Center between 1994 and 1995. Special software then enables processing the data recorded during testing and generates a report on the results obtained.

Within the scope of a research project focusing on the real-time positioning and automation of road construction vehicles, the LCPC conducted in 1996 a study in order to better ascertain the level of vertical precision that a GPS "real-time kinematic" (RTK) receiver is actually capable of attaining under work site use conditions.
Links: www.lcpc.fr
515 views