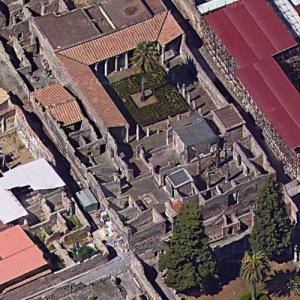 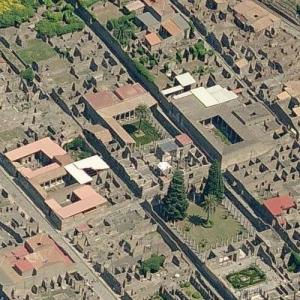 By Effi @ 2007-03-30 01:43:55
@ 40.751827, 14.484241
Pompei, Italy (IT)
With its 3000m² it is the largest house in Pompeii: built over a previous dwelling at the beginning of the 2nd century BC, its current form is the result of subsequent alterations. The entrance on the left leads directly into the public section, the door on the right to the private rooms: an atrium whose roof is supported by four columns, stalls, latrine, baths, kitchen. In the entrance is the Latin message HAVE. The ‘first style’ decoration, the floors of sectile opus, and the mosaic threshold (now at the Naples Museum) highlight the dignity of this house, more similar to the aristocratic Roman domus than local upper class dwellings. In the center of the impluvium is a bronze statue of the ‘faun’ (2nd cent. BC: original in Naples); around it are rooms that held mosaic paintings on the floor and ‘first style’ decorations on the walls. Between the two porticoed gardens is the exedra, the core of the dwelling, with Corinthian columns, stuccoed and painted capitals, a splendid mosaic (now at the N
aples Museum) depicting the victory of Alexander the Great over Darius, King of Persia, which has helped to suggest a connection between the Macedonian ruler and the unknown, educated, and wealthy owner of the house.
Links: www2.pompeiisites.org
3,479 views