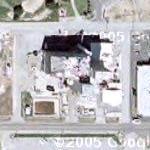 By kjfitz @ 2005-07-29 15:45:49
@ 34.231976, -118.711739
Canoga Park, California (CA), US
Also known as the Santa Susana Field Test Facility, this is a major rocket and propulsion R&D installation, a rambling 2,700 acre complex of 13 rocket engine test stands, and other field test facilities, in the Simi Hills, northwest of Los Angeles. Rocketdyne, once the rocket engine development subsidiary of Rockwell International, now owned by Boeing, is one of the leading suppliers of rocket technology to NASA and defense organizations. The Apollo rocket engines were tested here, as were the early V-2 rockets of the German rocket pioneer Wernher Von Braun, who occasionally worked at the site. Around 700 people are employed at the site, which also conducts laser research and other defense-related programs. The Department of Energy has facilities here, and has conducted research in nuclear fueled rockets and satellites. Nearby Moorpark claims to be the first community lit by commercial nuclear power, from an early reactor at this facility (Arco Idaho makes a similar claim). Major environmental issues have recently brought more outside attention to the site.


Alos on this site:

A nuclear energy R&D facility owned by the Department of Energy, and operated by Rocketdyne/Boeing, involved in applying nuclear technologies related to space flight, defense programs, and liquid metal reactors, in addition to solar energy and remediation technologies. The DOE facility is located on 90 acres within Rocketdyne's 2,700 acre rocket field test facility in the Simi Hills. Nearby Moorpark claims to be the first community lit by commercial nuclear power, from a plant at this facility (Arco Idaho makes a similar claim).
Links: clui.org
1,232 views

Parabellum
@ 2008-08-07 18:04:13
That first reactor was the Sodium Rector Experiment http://en.wikipedia.org/wiki/Santa_Susana_Field_Laboratory#Sodium_Reactor_Experiment
which may have released 260 to 459 times the amount of radiation that was released at the Three Mile Island facility.