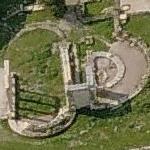 Church of Megale Panaghia. The first church was a three-aisled basilica, built in the 7th century A.D. on the ruins of the quatrefoil building which had been destroyed in the 6th century A.D. The basilica was in its turn destroyed in the 11th century A.D. and a single-aisled church with a chapel to the north was erected in its place. It survived for centuries but was burnt down in 1885.
Ruins of a church. The north wall and remains of the sanctuary are preserved. The church lies to the north of the quatrefoil building and dates from the 17th century A.D.
Links: www.greece-athens.com
816 views