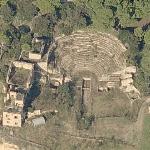 By Effi @ 2008-04-21 02:56:24
@ 40.794882, 14.184745
Naples, Italy (IT)
At the extreme end of the promontory of Coroglio is the Villa Pausilypon, the remains of the luxurious home of Publius Vedius Pollio, one of Octavian’s supporters. Upon his death the villa went to the emperor. The grandiose villa was composed of several buildings erected between the 1st century BC and the 4th AD, to cover an area of about 9 hectares. At the centre was the huge residential structure, around which were built a grandiose theatre, an odeion and thermal baths. Apart from its private dock on the Cala dei Lampi, the complex included its own roads and the tunnel known as the ‘Grotta di Seiano’, that crosses the rocky coastline to Coroglio, which today is the point of access to the complex.
1,512 views