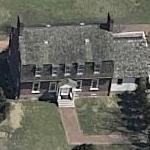 Snow Hill Manor was originally built circa 1755 by Samuel Snowden on 500 acres that he recieved as a wedding gift from his father. In 1764, the house was destroyed by fire and was rebuilt circa 1798. The brick walls of the current structure are laid in Flemish bond and the bricks are believed to have been salvaged from the original house.

The interior of the house features fine, Federal-style trim and possesses some unusual architectural features. On the ground floor, the corner cupboards have unique keystone arched openings. A brick on Snow Hill's exterior with the inscription "GW 1786" is thought to have been engraved by President George Washington or his wife, Martha.

In 1940, Dr. Bryan Warren bought Snow Hill to raise cattle for livestock yards in Baltimore. He later became a distinguished physician, known for his devotion and service to the community.

In June, 1992, the site was purchased by The Maryland-National Capital Park and Planning Commission for use as a rental facility for public and private functions.
Links: www.pgelegantsettings.com
1,092 views