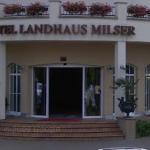 The result is known to everyone and we at Landhaus Milser are somewhat proud, it could be said that we were part of the success.
Links: www.landhausmilser.de
439 views