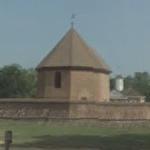 By LancelotLink @ 2010-06-17 11:45:35
@ 37.270277, -76.699751
Williamsburg, Virginia (VA), US
One of Colonial Williamsburg's original 18th-century buildings, the Magazine was built in 1715 by order of Governor Alexander Spotswood, who urgently requested a good substantial house of brick for the storage and protection of arms and ammunition. The Magazine played a dramatic role in an incident, known as the Gunpowder Incident of April 1775, which propelled Virginia toward revolution. British mariners were ordered by Governor Dunmore to empty the arsenal and disable the muskets, sparking anger among the colonists.
Links: www.colonialwilliamsburg.org
898 views