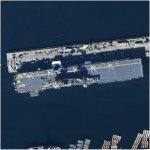 And it carries aircraft, known as helicopters.

The primary mission of USS Bonhomme Richard is to embark, deploy and land elements of a Marine landing force in amphibious assault operations by helicopter, landing craft and amphibious vehicle.

AKA: USS Bonhomme Richard (LHD-6) is an Amphibious Assault Ship, and the third United States Navy ship of that name, was named in honor of John Paul Jones' famous frigate, which he had named the French language equivalent of "Goodman Richard," in honor of Benjamin Franklin, the U.S. Ambassador to France at the time. The name Bonhomme Richard is derived from the pen name of Benjamin Franklin, the author of Poor Richard's Almanac.