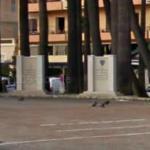 Right next to the memorials is the statue of Jean d'Arc (1412 - 1431), which was during the Second World War for the Vichy regime as the French resistance a symbol of their fight.
Links: www.oorlogsmusea.nl
487 views