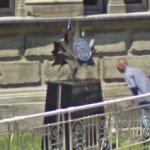 The series consisted of an eight game tournament between Canada and the Soviet Union. After seven games, the series was tied 3-3-1, but the Soviets held a tie-breaking goal differential advantage. Canada needed to win the final game to take the series title.

With the score tied 5-5, Paul Henderson scored with just 34 seconds left to win the game. It is considered by many to be the greatest goal in hockey history.

After that team was named Team of the Century by the Canadian press in 1999, the Royal Canadian Mint sponsored the creation of the monument. It features a bronze maple leaf with a chrome-plated medallion depicting Henderson's goal celebration. The granite base lists the team's players and recognizes the Team of the Century honors.

Nearly every member of the team was in attendance when it was unveiled on a rainy day in November 2000. Each player was given a miniature version of the monument.
Links: accounts.google.com
709 views