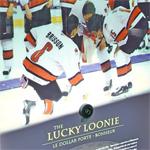 The ice surface was being prepared by a Canadian crew, and Trent Evans came up with the idea of hiding the coin under the ice as a good luck charm to the Canadian men's and women's teams. The coin did the trick, as both teams won the gold medal. The tradition has carried on in international competition ever since.

The coin was presented to Wayne Gretzky after the gold medal was won. It now resides at the Hockey Hall of Fame.
Links: en.wikipedia.org
611 views