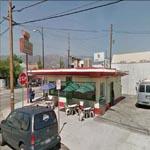 Steve's Burger's in Burbank, Ca. posed as the Chinese Food restaurant in the scene in which Jesse and Chester go for lunch.While ordering, the woman working the drive-through window continually asks him, “And then?