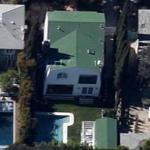 By jdubble07 @ 2013-03-05 11:54:48
@ 34.097159, -118.357875
Los Angeles, California (CA), US
Nightmare on Elm Street is a 1984 American slasher film written and directed by Wes Craven, and the first film of the Nightmare on Elm Street franchise. The film stars Heather Langenkamp, John Saxon, Ronee Blakley, Amanda Wyss, Jsu Garcia, Robert Englund, and Johnny Depp in his feature film debut. Set in the fictional Midwestern town of Springwood, Ohio, the plot revolves around several teenagers who are stalked and killed in their dreams by Freddy Krueger. The teenagers are unaware of the cause of this strange phenomenon, but their parents hold a dark secret from long ago.
Links: en.wikipedia.org
3,669 views