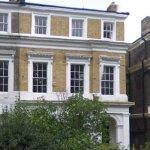 In a statement, the Metropolitan Police said: 'Police were called by London Ambulance Service to an address in Camden Square NW1 shortly before 16.05hrs today, Saturday 23 July 2011, following reports of a woman found deceased.

'On arrival officers found the body of a 27-year-old female who was pronounced dead at the scene.
Links: www.dailymail.co.uk, archive.curbed.com
8,217 views