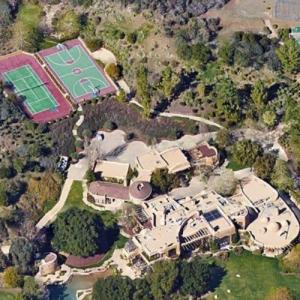 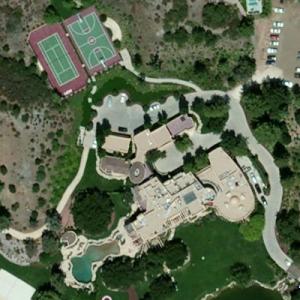 By DonMartini @ 2007-04-06 16:44:24
@ 34.0950026, -118.68121825
Calabasas, California (CA), US
Will Smith's house is located in Calabasas, California. Will Smith is a successful American actor, musician, producer and rapper. His career began in the 1980s when he was rapping with friend DJ Jazzy Jeff. His rise to fame started with the popular television series The Fresh Prince of Bel-Air in the 1990s. Since then, he has acted in over 25 films and was nominated for four Golden Globes, two Academy Awards and has won four Grammy Awards.

Will Smith is married to Jada Pinkett Smith, who is also a successful American actress, singer, writer and businesswoman. They met when Jada auditioned for the role of Will's girlfriend on The Fresh Prince, which she did not get. However, they became friend and eventually married in 1997. Jada has acted in over 25 movies and several TV shows.

Will Smith and Jada Pinkett Smith's 9-bedroom house spans 25,000 square foot, and sits on 150 acres. Designed by Stephen Samuelson, it started construction in 2003 and took 7 years to build. The adobe-styled interior is all custom designed, with rooms connecting to each other in a sweeping, fluent living area. The house features many interesting unique features, such as a meditation lounge and a recording studio. The large garage fits eight cars. The grounds feature recreational activities such as a basketball court, volleyball court, tennis court, a large swimming pool, and a sunken trampoline.

The house was featured in a 2011 issue of Architectural Digest.

As of February 2014, the compound is listed for sale with an asking price of $42 million.

Will Smith's net worth is said to be $200 million. His films have grossed over $6.63 billion in the global box office, and has sold over 21 million units of his Grammy Award-winning music.

The Smiths own numerous property around the world, including a 3.34 acre / 8,000 square foot mansion in Pennsylvania, a 4,100 square foot house in the Woodland Hills area of Los Angeles, and a 4.66 acre estate in Hidden Hills, CA. They recently sold a $20 million Kauai (Hawaii) estate in 2011.
Links: en.wikipedia.org
870,981 views