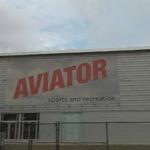 By kkeps @ 2011-12-29 17:19:15
@ 40.58917, -73.89965
New York, New York (NY), US
Aviator Sports and Events Center is a concession for the National Park Service operating in New York City’s historic first municipal airport, Floyd Bennett Field, which opened its hangars in 1931 and was decommissioned in 1972. Floyd Bennett Field (FBF) in Southeast Brooklyn is now part of the 4th most visited unit of the National Park System: Gateway National Recreation Area. Many of the original airport structures and runways are listed as a historic district on the National Register of Historic Places for their contribution to the nation's early aviation history. In the late 1990’s the National Park Service (NPS) was seeking private partners to help revitalize the field.

Aviator Sports and Events Center and the NPS have established a plan to improve a favorite destination for early pilots such as Amelia Earhart and Douglas “Wrong Way” Corrigan. Aviator and the NPS officially began their relationship in 2003 to adaptively reuse 4 of FBF's original hangars in the historic district (making them into one 170,000-square-foot (16,000 m2) building) and surrounding land, creating a sports complex totaling 25 acres.
Links: en.wikipedia.org
505 views