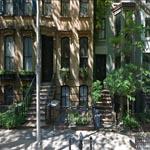 Yauch, known better by his stage name, MCA, was the founding member of the hip hop group the"Beastie Boys" and was inducted into the Rock 'N' Roll Hall of Fame in 2012.

Yauch, who had been diagnosed with cancer in 2009 could not attend the induction. On May 4, 2012, Adam Yauch died after a nearly three-year battle with cancer.
Links: en.wikipedia.org
2,595 views