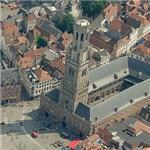 By kjfitz @ 2008-06-28 01:16:19
@ 51.207868, 3.225723
Bruges, Belgium (BE)
The belfry of Bruges, or Belfort, is a medieval bell tower in the historical center of Bruges, Belgium. One of the city's most prominent symbols, the belfry formerly housed a treasury and the municipal archives, and served as an observation post for spotting fires and other danger. A narrow, steep staircase of 366 steps, accessible by the public for an entry fee, leads to the top of the 83-meter-high building, which leans about a meter to the east.

To the sides and back of the tower stands the former market hall, a rectangular building only 44 m broad but 84 m deep, with an inner courtyard. The belfry, accordingly, is also known as the Halletoren (tower of the halls).

Played a prominent role in the movie 'In Bruges.'
Links: en.wikipedia.org
1,158 views