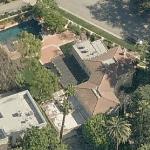 By jdubble07 @ 2012-02-03 18:36:48
@ 34.07662074, -118.41544988
Beverly Hills, California (CA), US
Down and Out in Beverly Hills is a 1986 American comedy film based on the French play Boudu sauvé des eaux, which had previously been adapted on film in 1932 by Jean Renoir. Down and Out in Beverly Hills was directed by Paul Mazursky, and starred Nick Nolte, Bette Midler and Richard Dreyfuss. The film is about a rich but dysfunctional couple who save the life of a suicidal bum. Flamboyant musician Little Richard also makes an appearance, and contributed the song "Great Gosh a'Mighty" to the soundtrack. The song's success led to a revitalization of his career.

Released by Touchstone Pictures, a subsidiary of The Walt Disney Company, Down and Out in Beverly Hills has the distinction of being the first R-rated film ever released by Disney. The R rating is due to profanity as well as a brief scene showing a maid in bed having sex on top, another first for Disney. However, countless R-rated films have since received distribution by Disney, under subsidiaries such as Touchstone, Miramax Films and Hollywood Pictures. Walt Disney Pictures, the flagship family-oriented brand, has yet to release a film with a rating stronger than PG-13.
Links: www.imdb.com
2,611 views