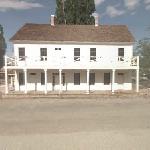 By Mike1989 @ 2013-04-11 06:48:34
@ 39.294321, -119.251762
Silver Springs, Nevada (NV), US
Samual S. Buckland settled along the Carson River in 1859 and began ranching. His early establishment served as an important way station for pioneer travelers on the Overland Route. It was one of the earliest ranches in the area, supplying emigrants, ranchers, travelers and the soldiers at nearby Fort Churchill. The Overland Stage Company kept horses at the station and the Pony Express stopped here for change of mounts.

As Fort Churchill was dismantled, Mr. Buckland salvaged materials from the fort buildings to build the two-story house that occupies the site today. The Buckland family lived in the house, and rented rooms to travelers.