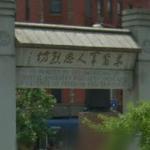 It is located on Kimlau Square, named after Second Lieutenant Benjamin Ralph Kimlau. He was a former resident of the neighborhood and as a pilot he was shot down with his B-25 over New Guinea in 1944.
Links: www.oorlogsmusea.nl
465 views